A year ago to celebrate the International Human Rights Day the aim was to feature well known or interesting poems that illustrate the importance of human rights, and warn of the dangers of neglecting them. In the following months Poems of Liberty saw three other editions, and received much attention and support. For this reason we decided not to dust off existing poems to repurpose them for the topic of the editions anymore, as much as we cherished reading and rereading famous poems, researching their and their authors' history and background. It is time to take a leading role in driving poetry in furthering liberty in Europe and in fact the whole world. It is time to give voice to a new generation of poets, who reflect on the issues of the world today. That is why we launched a competition among poets. The following edition features the best works in three topics: Press Freedom, Diversity, and Disinformation & Democracy.

We were delighted and not a little surprised that we received over 30 poems from 4 continents. It is not only the number of poems that presented us with a difficult choice. The quality of the works exceeded expectations. The topics, imagery, style and background of the poems ensured that reading the submissions was a delightful journey but a devil of a choice.

In the following pages, you can find our choice for the best poems submitted for the current edition, celebrating International Human Rights Day. Our hope is that you will take as much joy in reading them as we did, but also that the poems go way beyond the entertainment factor and will call attention to the importance of human rights, and in fact poetry.

Poetry has a long history in shaping our world. Poetry predates literacy. Stories were told in verse as rhymes aid memory. The Epic of Gilgamesh or the Iliad are prime examples of this. Their influence is so vast that they are even read and taught today. Poetry knows no borders. Even before the globalised world we live in today, cultures influenced each other through poetry. Shakespeare’s Hamlet was probably played on a British ship off the coast of Sierra Leone for local dignitaries in the early 17th century, a couple of years after it was written. Persian poets and poems were much enjoyed in Europe over the past centuries and the seeming simplicity of Japanese haikus still captivate readers throughout the world.

Politics do not go without poetry either. Churchill quoted poems in his speeches, and even wrote poetry himself. Former British Prime Minister, Boris Johnson also admitted he reads poetry, and he caused an international scandal by reciting Rudyard Kipling’s Mandalay in Myanmar.

Poetry is not always full of love and sensitivity. When the Roman poet Catullus was accused of being soppy, he wrote a poem of such fierce expletives, that it was censored for a long time. The fictional character of James Bond, who is far from being overly sensitive, also recites poems in the books.

Yet there are poems which sensitise people. They empathize the horrors of war, slavery and other issues that are still very much present. Despite the Universal Declaration of Human Rights, which is a great achievement in the history of humankind, there is much to be done. Rights of people are still trumped today and more efforts are needed to change this. This publication is a drop in the ocean. Without drops, however, there is no ocean. The poems within this edition can stir giant waves to call attention to problems, and motivate people to do more.

As always, you will also find a few comics by one of our Animate Europe artists in this publication. Animate Europe is a project by FNF to make political issues more accessible and fun through the medium of comics. This time, we are happy to include artwork and insights by our artist Marco Tabilio.

Finally, to introduce this edition of Poems of Liberty you will find a poem by one of the editors of this issues, Máté Hajba, after the editorial. We wish you a happy reading, and we thank all the people who submitted their great works! 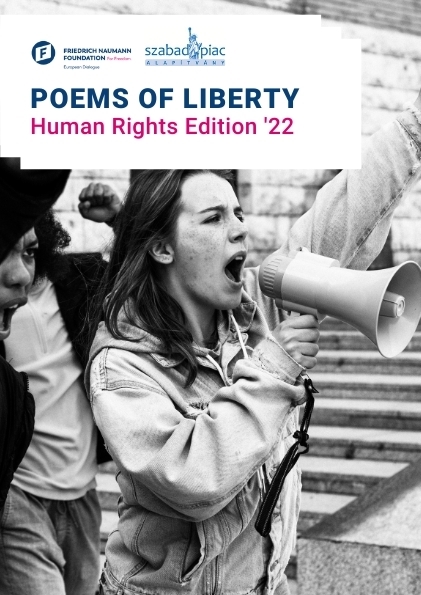