The education and discussion on democracy and social or political issues are very important, but the process can sometimes be a bit too serious. Can we approach these topics in a different way? The answer is yes. With games, people are safe to explore all kinds of possibilities for advocating democracy and simulate real life problems that cannot be easily solved. Games are not only fun, but they can also be educating and inspiring.

Change of perspectives with games

At the event on August 24th, Ms. Annie Kuan from 1095 Culture Studio shared with us her experience in training police officers with Migrant Worker Life in Taiwan. Due to the lack of language ability and understanding of migrant workers’ cultures, basic-level police officers often don’t know how to properly approach them on the street or address their problems. This game allows players to walk a mile in migrant workers’ shoes, and experience the day-to-day challenges they may encounter.

Everyone can play a part

Clair Cheng, Project Manager from Open Culture Foundation, shared with us their newest game, Open StarTer Village, which is developed with the support from FNF Global Innovation Hub, at the event on September 1st, describing open source as sharing a recipe. With the shared recipe, everyone can not only cook the same dish by themselves, but also add other ingredients to create more delicious dishes. Based on this concept and according to the CC-BY-4.0 license, all the elements of Open StarTer Village are public and free to download online.

Through this game’s diverse characters, OCF wishes to convey that people from different disciplines can work together and contribute to an open-source project, alleviating people’s fear of technology. Moreover, the game also shows that the concepts of open source, open government, and open data are intertwined, and can actually benefit each other.

From Sim Democracy and The Poll, we also better comprehend the concept of participation. The two games simulate real-life scenarios in the political world, allowing players to gain sufficient knowledge on public participation in democracies. By doing so, politics can become something that every citizen can take part in, instead of only the elites or the rich.

What the future holds for these board games

Digitalization is trending, but the participating organizations, such as 1095 Culture Studio and Taiwan Gender Equity Education Association, expressed that it is not so easy to digitize these games due to lack of resources. For the time being, hard copies are more practical since most of the promotion and trial plays are conducted face-to-face. Also, Mr. Abeer Kapoor, founder of Civic Games Lab and the Poll, mentioned that when the games are online, communities and people without much access to the Internet will then be excluded. However, many do intend to introduce these games to other countries, such as TGEEA with their English, Thai and Japanese versions of Home Play.

The Democracy Board Game Festival not only introduced these brilliant board games to the public, but it also facilitated the cooperation and exchange between these participating organizations. With games, more people can hopefully engage in discussions and innovations of various social and political issues for a better democracy.

For those who missed our Democracy Board Game Festival, feel free to download the publication below and learn more about these board games! 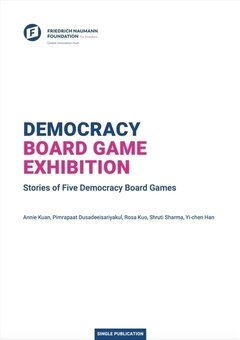 This publication features five inspiring board games that participated in the Democracy Board Game Festival organized by the FNF Global Innovation Hub in 2022. These board games provide a fun and innovative way of learning about more serious issues such as politics, open source, rights of migrant workers, and diversity of family structures.