Challenges for the future for a group that wants more and better Europe
Analysis
23.06.2022
5.9 Minutes
Spain, Italy, Portugal and Mediterranean Dialogue

"How can we build Europe if young people do not see it as a collective project and a representation of their own future?"

With this eloquent sentence, the President of the European Commission, Ursula von der Leyen questioned in the last State of the Union Address (SOTEU) of 2021 how the European Union of the future could be shaped without the collaboration and involvement of Europe's youth.

According to data from the CIA World Factbook, in 2017 the percentage of the population between 15 and 24 years of age - the cohort considered by EU bodies to be young - was almost 11%, with a total of 56 million people. However, the figures for recent decades are discouraging: today there are 25 million fewer young people in Europe than in previous decades.

It is in this demographically complex context that it was decided to respond to the question posed above by naming 2022 as the European Year of Youth. The European Union thus sought to give institutional recognition to the efforts made by European youth since 2008 with the outbreak of the "Great Recession", whose effect was abruptly multiplied with the acute recession following the pandemic crisis of 2020.

This choice is neither trivial nor random: it is precisely this year when the Conference on the Future of Europe (CoFoE), a pioneering experiment in participatory democracy, was concluded and its Conclusions were published on 9 May after a year of conclaves. A total of 49 proposals were set out, which European youth will be indebted to in the event that the process of a European Convention and the consequent reform of the treaties that seems to be on the horizon finally gets underway. Although many of them are of a cross-cutting nature, specific proposals were formulated with respect to European youth, stressing, for example, the need for the EU bodies to focus on their specific needs.

What can be affirmed beyond the CoFoE result is the overwhelming support that young people have given to the European integration project represented by the European Union. The Eurobarometer on Youth and Democracy published on 6 May by the European Commission confirms this trend and shows that European youth want to be taken into account in the EU decision-making process: up to 72% say so.

This dynamic of Europeanism among the Union's young generation reached another historic milestone in the 2019 Parliamentary Elections: 42% of 16–24-year-olds voted in the elections, a 50% increase in turnout in this age cohort compared to the previous elections in 2014, where it was 28%.

However, the European Year of Youth cannot be thought of as an event and commemoration for a monolithic sector of the European population to be called "European youth". It would be a mistake to think of it as a homogeneous entity whose needs, interests, aspirations, and claims are similar. Demographic and/or socio-economic cleavages or gaps could be established in this sense. It is particularly noteworthy that between the populations of the countries that make up the northern and eastern area of the European Union and those of the southern area, i.e., the countries of the Mediterranean region.

Focusing the analysis on the latter, it goes without saying that these territories have traditionally been the main victims of the aforementioned cyclical crises. Thus, the Great Recession hit southern youth particularly hard and, at the height of the crisis in 2013, more than 60% of young people in Greece and 55% in Spain were unemployed. Despite the sharp decline, it is still this group of countries that have the highest youth unemployment rates: 30.6% in Spain, 30.5% in Greece and 26.8% in Italy in 2021.

The main effect of this crisis cycle is the emergence of a significant generation gap in these countries. Thus, in Spain, Italy and Portugal, the generation that entered the labour market during and after the Great Recession has seen their working careers start with lower incomes than previous generations. This North-South cleavage is equally evident in the generation of wealth: in the aforementioned countries the capacity to accumulate wealth has been significantly reduced compared to previous generations and young people in countries such as Germany.

Although income levels gradually recover from their thirties onwards, young people in the South face a kind of "lost time" compared to previous generations when they were the same age. This is subsequently reflected in greater difficulty and delay in emancipation and, logically and in conjunction with the deterioration of their position in the labour market, a decrease in the number of children. This aspect, together with the aforementioned complex demographic situation in Europe, opens up a complex horizon that will have to be analysed in detail by the EU institutions.

This is why the youth of southern European countries is a paradigmatic example of the challenges facing the European Union, which the European Year of Youth aims to address and elucidate. Southern youth, who are strongly pro-European and in favour of greater integration, must be reflected in the European project for the future that is to be drawn up after the CoFoE. To this end, their special requirements and originalities compared to their northern counterparts must be taken into account. This is the only way to achieve its necessary empowerment as a debtor of the Europe of the present and a builder of the Europe of the future. 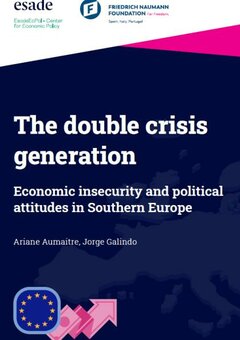 This study offers an in-depth analysis of the socioeconomic situation of the “double crisis generation” in Southern Europe and the development of their political attitudes.