How Emmanuel Macron could remain in office with a tail wind
Analysis
29.03.2022
7.1 Minutes
Europäische Union

Advantage of incumbency – this is probably the term that, along with the issues of "purchasing power" and "Ukraine war", will have the greatest influence on the outcome of the French presidential elections in 2022. In view of the "turning point", as proclaimed by German Chancellor Olaf Scholz on the occasion of the Russian invasion of Ukraine, the omens have also changed significantly for the elections in France in April this year. Three weeks before the elections, all the polls suggest a clear result: In the first round of voting, Emmanuel Macron and Marine Le Pen will clearly prevail – just as they did five years ago; and the second round of voting also seems to be heading for a similar result as in 2017: Macron's (re-)election as French president.[1]

And yet the field of candidates in 2022 organised itself even later than in previous elections: With the far-right representatives Marine Le Pen and Éric Zemmour, two candidates currently above ten percent in the polls were only able to secure their participation in the elections thanks to a pool of parrainage votes (sponsorships).[2]  Moreover, the incumbent president announced his candidacy only at the last minute – and this in an extremely sober form via a letter to the citizens of France published in local newspapers.[3] In view of the war and the Corona pandemic, there did not seem to be a suitable momentum for Macron to make public his renewed candidacy, expected by all, with a glamorous presentation characteristic of him. However, as incumbent president and thanks to France's presidency of the Council of the EU, he benefits from his role as a potential interlocutor of both warring parties and can present himself as an anchor of stability, chief diplomat and defender of the democratic system. A role that is not only attributed to the president by virtue of his office, but seems to be tailor-made for the (still) young Macron.

The left camp also organised itself very late. At first, several candidates, including former justice minister Christine Taubira (Parti radical de Gauche) and Paris Mayor Anne Hildago of the Parti Socialiste (PS), threatened to steal each other's votes. Although Taubira ultimately withdrew her candidacy despite a clear pre-election vote in her favour, this does not change Hidalgo's hopeless situation, which according to current polls would not even reach five percent of the vote. On the left, Jean-Luc Mélenchon, who won 19.5 per cent of the vote in the first round in 2017 but no longer has the support of the united radical left, only barely managed to gain the necessary support in the form of parrainages. Nevertheless, he has established himself as potentially the most successful leftist in the field of candidates, with a forecast of around twelve percent. His leading position in the left camp is not even threatened by the Green MEP Yannick Jadot, who with about seven percent in the polls is doing quite well by Green standards, but will not be able to match the good results of the Greens in the last European elections. Thus, Mélenchon, as the candidate of the left with the best prospects, could at least benefit from the vote utile[4] ("useful voting") of not yet decided left-wing voters. However, he is struggling with his hitherto Russia-friendly basic attitude, which he is trying to make forget by a clear condemnation of the acts of war.

Also the candidates on the right wing came under pressure to justify themselves because of their previous Putin-friendly statements. This is especially true for the surprise candidate Éric Zemmour. In recent years, the publicist has gained a dubious reputation in the French media as a polemicising right-wing populist. With his announcement that he will run in the elections, he has stirred up the political right beyond the Républicains and seems to be attracting not only potential voters away from Macron's permanent rival, Marine Le Pen, but also party functionaries, including the candidate's niece Marion Marechal-Le Pen. With his national populism, Zemmour succeeds in winning over those voters for whom the Rassemblement National appears too moderate as a result of Le Pen's "demonetisation" course of recent years, as well as those whose trust in politics and society is particularly low.[5] He is thus fishing above all among those who in the meantime threatened to turn away completely from politics or have already done so, but some of whom had still voted for Le Pen in the last elections. Zemmour is also the candidate of a part of those who have joined a radical anti-system movement, which unites different groups from anti-vaccination activists to radicalised yellow vests protesters to nationalists. However, he has lost some support as a result of the war in Ukraine, as he has repeatedly expressed his admiration for Vladimir Putin in recent years and has recently rejected the admission of Ukrainian war refugees. He is currently polling at around 13 per cent.

This in turn seems to be surprisingly benefiting Marine Le Pen, who in 2017 also attracted attention as an admirer of Putin and has now quickly distanced herself from him. Until the start of the war, she had been in a race on a par with Zemmour. However, it is clear that she has learned from the mistakes of the previous presidential elections and has correctly assessed the voters' priorities with her focus on economic and social policy issues. Although her national-populist positions have not weakened at all, she seems more moderate compared to Zemmour and can thus win over voters from the right camp who are put off by Zemmour and not convinced by Valérie Pécresse, the candidate of the Républicains (LR). Like Mélenchon on the left, Le Pen could ultimately benefit from the vote utile on the right.

With around ten percent, the economically liberal and conservative LR candidate Pécresse, on the other hand, is doing worse in the polls than the two radical right candidates. The president of the Région Île-de-France barely prevailed in the internal party primaries, but is only supported by parts of her own party; the Républicains are torn between a moderate and a right wing and could not unite behind their candidate. Nevertheless, at the beginning of the campaign, it had looked as if she had the potential to make it to the second round. Her profile is similar to Emmanuel Macron's in terms of economic policy, but at the same time, she mixes social accents into her programme and pursues a hard line on immigration. In this way, she attempts a balancing act between appealing to moderate liberal-conservative voters and holding on to or bringing back those who follow the course of Le Pen or Zemmour. Recently, however, she lost considerable momentum in the face of what were considered disastrous campaign appearances and strategic mistakes.

Similar to 2017, Macron is likely to benefit once again from a window of opportunity, as he is apparently able to make full use of his advantage of incumbency and take advantage of the weakness of his opponents. Thus, Russia's war against Ukraine seems to consolidate the changes in the French political system that have become evident since Macron's election in 2017:[6] In 2022, representatives of the progressive centre and the right-wing edge are likely to clash in the second round of elections, further marginalising the bipolar order that has prevailed for decades and its most important representatives, the Parti Socialiste and Les Républicains.

Dr Daniela Kallinich is a political scientist. She has conducted research on parties and politics in France and Germany at the Göttingen Institute for Democracy Research and obtained her PhD for a study on the political centre in France. Her most recent publication is: Das Mouvement Démocrate. Eine Partei im Zentrum der französischen Politik.

[2] French presidential candidates must have so-called sponsorships from incumbents, such as mayors, in order to participate officially in the election. This is much easier for representatives of established parties that are firmly anchored at the municipal level than for newcomers without a party behind them. In view of the unfulfilled election promise of Mouvement Démocrate (MoDem) and Macron's En Marche to reform the electoral law in the direction of more "proportional representation", the parrainage pool was an initiative of François Bayrou, the leader of the MoDem party in coalition with Macron's La République en Marche, to enable voters whose favourites would otherwise not have been present to vote in their favour.

[4] Vote utile (useful voting) refers to a phenomenon that is particularly relevant in France due to the majority voting system, according to which voters cast their votes with calculation in order to ensure the success of candidates, even if they would actually have preferred to vote for another person whose chances of success, however, are lower.

[6] This development has been ideologically visible since the 1990s and has so far manifested itself, for example, in referendums on intensified European integration, most recently on the Constitutional Treaty for the EU in 2005. In 2017, this social divide manifested itself for the first time in the presidential election, which dominated political events. 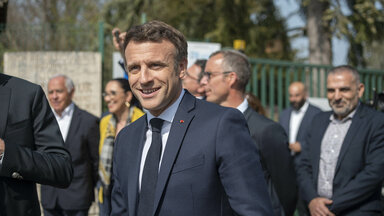 Emmanuel Macron started out as a dynamic hopeful with a liberal profile, beyond left and right. He wanted to advance Europe, strengthen the French Republic and democracy, eliminate social deficits, reform outdated socio-political laws and make the economy (more) competitive. He won many allies, especially in the centre of the political spectrum, but also in conservative and left-leaning camps.