Resource Dependency from China: A Possible Way Out for Europe

After months of crisis experience with Russia’s manoeuvring in energy policy, Europe has learned the hard way: it is not advisable to rely majorly on one single partner when it comes to essential resources. This applies especially when the trust relationship with that partner has already been burdened by tensions and scepticism from the beginning. Now Europe is struggling desperately with the effects of the Russian attack on Ukraine and its economic consequences. There can only be one conclusion: Don’t rely on one partner only!

It does not come as a surprise that Europe, and especially some of its most energy-dependent member states, like Germany, are now withdrawing from Russian gas imports. After all, about 55% of Germany’s gas supplies used to come from Russia. But finding alternatives is costly. Germany, for example, is investing over 200 billion euros to buffer the rising energy prices that result from such a sudden and enormous bottleneck in supply. But the state is not the only one who is paying: private households and corporate businesses are shouldering their share of the load, and the financial burden they bear is immense. All European member states do not have the option to subsidize as heavily as Germany does or choose not to for different reasons. It is also true that not all of them are as severely affected as Germany is. But the lesson learned is still a European one – and the big question will be what the European community will learn from this experience.

Adaptation as a chance

Substitutions are, of course, available: Great Britain, Norway, Denmark, and the Netherlands have increased production and redirected part of their supply deliveries. Southern Europe has its alternative pipeline connections. In addition, Europe now receives bigger shares of liquefied natural gas from Northern America, Qatar, and other countries. So far, so good – this diversification is an effective working strategy as long as supply chains remain uninterrupted and sea routes are open. Long-distance imports will still be significantly more expensive than sourcing in one’s neighbourhood, but the higher price is well worth the independence this diversification creates. In addition, the EU’s options to increase domestic production are being fiercely debated, albeit with strong objections against the expected environmental side effects of gas mining that come along with profitable techniques such as fracking. Ultimately, another way to reduce dependency is by simply consuming less energy, a call to action that causes high levels of discomfort and welfare disruptions initially but will, in the long run, set a strong incentive to become more energy efficient and invest in technological innovation. Think of the effect the oil crisis of 1970 had on technological advancement!

Renewables– another dimension of dependency

The necessity to replace gas is also a huge possibility to boost sustainable technologies. Renewables are a big part of Europe’s way out of dependency. The application of biogas and a switch to a mainly electricity-based energy supply system powered by wind and solar will gain priority. Europe can thus kill two birds with one stone, both countering dependency and pushing its much-needed energy transition.

That said, we notice another dimension of dependency here: again, Europe relies heavily on imported technology from China: in 2020, the EU imported 75% of its solar panels from China. Given the political direction the Chinese government has taken in recent years, Europe finds itself yet again in a situation where it depends on supplies from a partner with whom the trust relationship is already heavily disrupted and who is suspected to be capable of using Europe’s dependency to its advantage, potentially using it as a political weapon in a not-so-distant future. But we are not speaking of solar panels alone here: the real dimension of dependency is a lot bigger still.

Raw materials and the future of productivity in Europe

Even for those products that are not manufactured in Chinese factories: many raw materials they are composed of are still mined in China or mined elsewhere but under Chinese commercial authority. The scope goes way beyond what is needed to build solar panels. The global raw materials market is absolutely dominated by Chinese providers. It is easy to underestimate what this really means. That is until we finally become aware of our own rising need for these materials by forecasting our intended technological development of the upcoming decades and realizing the quantities of crucial materials that will need to go into it. For example, Europe’s demand for rare earth elements, which are needed for literally the entire spectrum of smart and efficient high-tech devices, will multiply three to seven times until 2040. Currently, 100% of these elements are provided by China. It is clear that no matter what product they finally end up in, the point is that they are, in fact, delivered.

Global supply chains – what is the problem here?

We have become used to the global character of supply chains for obvious reasons. Let’s not forget that a big part of Europe’s economic success over the last decades has built the outsourcing of production. Without ignoring well-founded ethical concerns and the necessity to balance out standards of equality and fairness, this also benefits Europe’s partners. Thus, it is not the world’s interconnectivity that is being questioned. It is the dependency on single actors that concentrate power. Economists call the effect a cluster risk: disrupt one chain of provision, and other chains can be impeded to the point where national economies might face instabilities way more severe than the current gas crisis. China’s role in this context is especially sensitive since the Chinese government is seeking to expand its power by all means possible. Its industries, financial economy, and military buildup are all subdued to this cause. For Europe, it is, therefore, crucial to find alternatives for its dependencies from China. Applying its learnings from the Russian example now is the time for Europe to diversify its raw material sourcing. It is the only way to ensure that Europe upholds its range of manoeuvre and decision-making, both economically and politically.

Steps on the way out

Ultimately, what needs to be done now is not much different from the current measures in response to the gas crisis. First and foremost, Europe needs to identify new sources of raw materials. This is possible both with reliable international partners and within the EU itself. Another crucial step is to boost resource efficiency, for example, through the transition to a circular economy. The European Dialogue Programme and the Liberal Institute of the Friedrich Naumann Foundation for Freedom have joined forces with Ecologic Institute Berlin to explore the potential of the EU circular economy in a new study. Follow the link to the publication (available in English and German) to learn how the circular economy can contribute to boosting European resource independence and what successful circular models are already in place and await expansion. 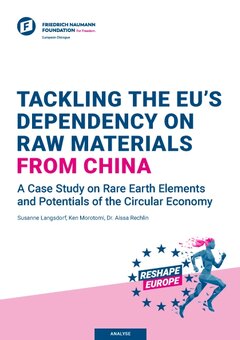 Europe’s industries have been striving on imported raw materials, which has created a strong dependency on resource providers. In particular, China has established itself as the main provider of numerous critical raw materials, the disruption of which, if used a political instrument to impose pressure in an age of increasing geopolitical divergence, could seriously endanger economic stability in Europe. This study investigates Europe’s options to diversify raw material sourcing and takes a close look at one of its major strategic resource autonomy projects: the circular economy.

Taking rare earth elements as an example, it evaluates circular strategies that have already proved efficient in Europe in specific sectors and offers suggestions on how to make these approaches more widely applicable. 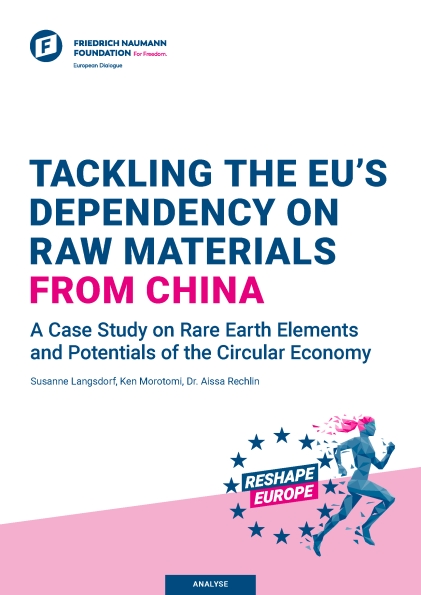