The American artist of Ukrainian origin talks about how she survived the outbreak of war, where she draws her strength for the struggle and for her art in support of the army.
Feature
26.08.2022
11.7 Minutes
Ukraine and Belarus

Ola Rondiak, a U.S. artist of Ukrainian origin, was born and raised in emigration. After Ukraine gained independence, she decided to return to her homeland. Ola and her family preserved their Ukrainian identity, while being abroad after World War II. The artist is now witnessing how Ukrainians are once again fighting for their identity. And that is what she shows in her works. In an interview for WoMo, Ola shares what she felt when the war started, where she finds strength to fight and how she creates art to help the army.

How did your family preserve their identity over so many years of emigration?

After World War II, my parents were forced to emigrate; my mother and grandfather ended up being refugees in Austria, and my grandmother was sent to a labor camp in Mordovia by the Soviet Union authorities. This is our tragic story. It was important to my parents to pass down Ukrainian culture and history to us. They were afraid that Ukraine would lose its culture, because the Soviet Union was conducting russification. It is unbelievable that history is repeating itself. As a child, I always said that I was Ukrainian and was proud of it. Every Saturday, I went to a Ukrainian school. It was my life, my inspiration, my identity. When Ukraine gained independence, I had just gotten married and together with my husband we decided to move to Ukraine to understand our roots. I knew Ukraine through my mother’s memories, and she was 11 when she fled Ukraine. But when I came to Kyiv, very few people understood me, because everybody spoke Russian in the capital. It was like getting stabbed in your heart. Why did nobody understand me? What was going on? I was shocked at the reality. Of course, 60 years under the Soviet Union did its dirty work – Ukraine was not developing the way it should have.

Then, there was the Orange Revolution and then the Revolution of Dignity. It was the choice of Ukrainians, their unwavering spirit.

What made your parents flee Ukraine?

They lived in Western Ukraine. My grandfather was a professor of linguistics. He believed in Ukraine and he did not want Ukraine to succumb to the Soviet Union. He knew that Ukrainian schools and churches would be suppressed. He wanted Ukrainian to be the language to be taught in schools, and he was arrested for that.

My mother said that when her father returned, she didn’t recognize him. He was all skin and bones and it was evident that he was tortured. They knew he wouldn’t survive this once more, so together with my grandmother they decided that he would travel to the West for some time. They thought that the Germans would win the war and they would return, but the front line was moving towards the West and they couldn’t return. My grandmother stayed in Kolomyia, because her 19-year old daughter Olya (I was named after her) could not walk. Unfortunately, she later passed away in my grandmother’s arms. While my mother and my grandfather were refugees in Austria, my grandmother was sent to Mordovia, because she was helping Ukrainians. This was against the rules of the Soviet Union.

She was sentenced to 25 years at a labor camp in Mordovia, but was released 10 years later, in 1956, like many of our exiles, when Khrushchev came to power. While at the labor camp, my grandmother started to embroider icons. When she was released she took the embroidery with her, having sown them into her clothes. They crossed the ocean, when my grandmother gave them to a priest, who took them to the U.S. He ended up in Chicago, and in 1980, an article came out in a newspaper about my grandmother and her embroidery. Through the diaspora, they found my family in Ohio and sent these embroideries in an envelope.

After the Revolution of Dignity, I created an icon collage with articles from magazines; it is also symbolic. Because my grandmother did not get to finish the icon, it needs to be done now, because Ukraine is once again fighting for its freedom.

My grandmother never got to see my grandfather again, but they corresponded. I am making copies of these letters and inserting them in the collages.

What traditions did you have in your family to preserve Ukrainian identity?

The Ukrainian diaspora quickly built Ukrainian schools and often organized celebrations according to our traditions. For example, for the Ivana Kupala Night, we made wreaths and jumped over the fire. Christmas is the most important holiday that we celebrate at home, with 12 dishes for dinner on Christmas Eve. Before the war, my cousin lived in Kyiv. I asked her how to cook borsch, and she just laughed saying that she hadn’t learned it yet, while I thought that every Ukrainian woman knew how to cook borsch.

Many Ukrainians have been forced into emigration recently. What helped your mother and your grandpa survive their emigration?

I heard from my mother that it was alright for her, because she was with her father, although he was 55 and didn’t speak English. So, it was hard for him. When they came to the U.S., my mother was 16. It was a period when a girl turns into a young woman, but she did not have her mom next to her, did not have her example to follow. She was happy that they started the journey. She thought of it as an adventure, just like the majority of children. Children are strong and can quickly adapt to new circumstances, but it is always difficult for me to think about women who are now with little children. Ukrainians have a very strong spirit. It is not the first time they are surviving a genocide. You need to hold on to this faith and strength. In the U.S., I try to participate in every fundraising event and try to make sure the money is used to help.

What was your first painting after the war started?

I started a new series called War Women. I actually didn’t know what to do, but I knew that crying wouldn’t help, so I made myself find strength and find how to help people during the war. I took charcoal, although I’d never worked with it before, and asked a friend to model for me. As soon as I started the series, a gallery in Miami put them up for sale. I haven’t even had the time to name all the paintings, and there are over 50 of them now. Later, the works were put up for an online auction. Recently, one of the paintings was sold for USD 20,000 at an auction. All money is used to help Ukraine.

These are all Ukrainian women. I once read on social media about a woman. Her name was Nastia and she impressed me. I hadn’t even read this story with the dogs, I was just looking at her face, drawing inspiration from her emotions. I created a painting right away.

What is your opinion of Ukrainian women now? What changed in them?

In 2013, I started working as an artist. My children started going to school and I decided to turn my hobby into a job. I parked my car outside, turned my garage into a studio and started working every day. I decided that it was my fate, my work.

What was the message of each of your series?

I think that’s for the critics to decide. I simply react to everything happening in my life. It is my process of understanding myself, my history, my family, the tragedy of Ukraine and what I went through when we moved to Ukraine. It is about identity; it is in my paintings.

When children were little, we often traveled between Ukraine and the U.S. The paintings reflected all my emotions and I tried to work at my studio fast to capture these emotions on the canvas, not to lose them.

How did your children take the war and how do you support them?

Hard. I believe that art is a good way to survive difficult times. They are gifted; they have musical talent and I believe that it is helping them. When the war started, my husband was in Kyiv. I woke him up at 5am and asked him to leave the country. It was very difficult, because he is a true patriot and a company director. He wanted to support everybody, but he knew that he would be able to help much more outside Ukraine. He went to Romania, got to Warsaw and stayed there for two months, because he wanted to be closer to the team in Ukraine. My husband asked me to come to Warsaw, but our children were in the U.S. and I thought it would be best for me to be with them. I support my children, even though they are adults now. They grew up in Ukraine, and although they have U.S. passports, Ukraine is their homeland and they want to come back to help heal it all together.

Author of the article: Victoria Pokatis

This article was prepared by the editorial office of Ukrainian women´s magazine WoMo as a part of the author´s special project "Unbreakable" in cooperation with Friedrich-Naumann-Foundation for Freedom in Ukraine supported by the Federal Foreign Office. 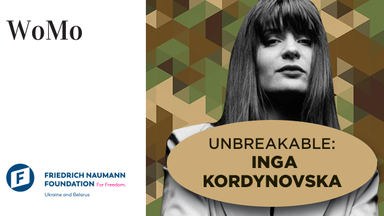 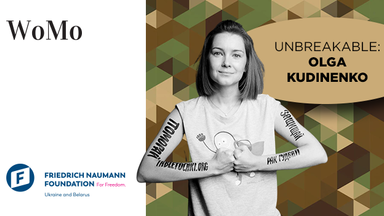 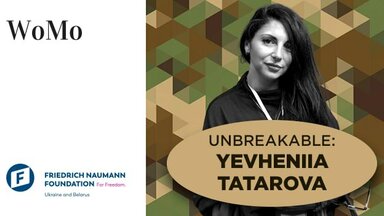