Racism
"A candidate will never save us. In a democracy, we must save ourselves."

The murder of George Floyd by a police officer and the murder of Ahmaud Arbery who was shot by two white men while he was jogging reminded Europeans of the grave racism problem the United States has. I guess those who were hoping for a better America when Barack Obama was elected into office were too optimistic about the country’s ability to change?

While we continue to say the names of those who have passed away in the last few weeks, we must not forget that there have been countless names of black people who have been openly murdered throughout this country’s history.

There is often a focus on the presidency, but one single office will never fix the deeply rooted issues in this country. There is a false idea that candidates are heroes who can single handedly mend the racism and inequality in the United States. The reality is that the issues that face this country are systemic and rooted in all aspects of life. The solutions, too, must come from all sectors of society. That includes not only our government, but also our economy, our education system, our media, our entertainment industry – everything. A candidate will never save us. In a democracy, we must save ourselves.

What makes racism in the US, addressed against all non-whites, different from racism in other parts of the world? It seems to be over-persevereing, the civil war that was led over the abolishment of slavery, is 150 years back.

A lot of racism is codified into our law. Even after the abolition of slavery, the black codes and Jim Crow laws were established to keep Black Americans as close to slavery as possible. Democratic processes such as the electoral college and rampant voter suppression have allowed many states to maintain minority rule since their inception - these structures were born out of the oppression of black lives and remain fundamentally unchanged today.

To this day, people in the US don’t like to confront the realities of racism and white supremacy. People are more willing to fight against someone being called “racist” than to fight racism itself. While some nations directly address the realities of hate in their nation, the US consistently pushes them under the rug. Our culture tells people of color to fit in and to keep quiet, even when racism is blatant. This ignores the reality that racism is killing black people daily.

What we are seeing right now is a wave of people declaring enough is enough, and calling for an end of our racist, white supremacist systems of representation, policing and wealth accumulation.

Harvard historian Jill Lenore writes in “The Case for the Nation” that there are two Americas: one is the cosmopolitan, liberal one, embodied by Barack Obama, the other one is the exclusionist, white one that Donald Trump embraces. Neither Obama nor Trump invented their version of the States, so it seems difficult from a far to see any way out of the situation in the US.

There are many Americas. Some parts of this country face crumbling infrastructure, are in destitute poverty, and are steeped in openly racist rhetoric. In many ways this nation is far from the ‘melting pot’ people once imagined it to be. There is so much focus on the wealthy and the elite, but so much of the wealth of this nation is built by black and brown communities. America has benefited from brilliant marketing, but the curtain has been pulled down. We are finally getting a real good look at one another.

What’s more, many of the most cosmopolitan areas of the United States have deep issues regarding race. We have seen that in Minneapolis, New York, and Atlanta in the past weeks. Racism is not simply relegated to some stereotypical place in the rural countryside.

The reality is that this country has always been divided. The only difference is that people are being forced to view that reality now.

In your opinion what would have to happen to change the United States? The protests all over the country are a good sign for a civil society that is invested in a peaceful, harmonic future. But will this be enough?

The protests are highlighting the immense racial inequality in this nation. The reality of 40 million people unemployed furthers people’s desires to fight back. Over the past few years we have seen the Women’s March, the Climate Strikes, The March for Our Lives, the March for Science, and now the Black Lives Matter Protests. What we need is for the people in the streets to march to the polls in November, and for them to vote out every politician who supports white supremacist policies.

The reality is that America needs a 3rd Reconstruction that addresses systemic issues of racism and representation. We need to vote to get there.

President Donald Trump has worsened the situation and is determined, in my opinion, to deteriorate the constitutional framework of the United States. Moreover, all his rhetoric and attacks against the protesters, deploying of the national guard, seem to stem from an autocrats playbook. As a matter of fact his strategy resembles pretty much how Chinese leader Xi is cracking down on the protests in Hongkong. Do you share my concern for the future of democracy in the US, what is your take on that?

The irony of the protests in the US is that these protests, which largely started because of police brutality, are being met with even more police brutality. Protesters are being threatened with bigger consequences than government officials embezzling millions of dollars. Journalists of major networks are being shot live on the air. On top of that, we are seeing attacks on our election system and on vote by mail in the midst of the pandemic this government has struggled to deal with.

We are seeing so many flaws in our system. While many are frustrated with the president, the marches in the street go beyond him. He is a symptom of a system that has been deeply infected with racism. Without changes in leadership across our government, our democracy will continue to be in jeopardy.

It all will come down for both camps to mobilise their supporters. Donald Trump is already ramping up, his reactions to the BLM protests catered to his base and not to a divided nation. How do you plan to mobilise voters with Plus1Vote?

Plus1Vote is dedicated to improving voter turnout and improving representation in our democracy. We are training a nation of young activists to organize their communities to vote on issues that matter, like social justice, climate change and health care. We are training activists from the streets to organize to change the people in elected seats. People are the lifeblood of democracy, so we have to get people moving out on the ground and online if we want this country to thrive.

If you had one wish for the nation, engulfed in conflict and polarised to a maximum, which one would it be? How could the country heal?

Vote. If everyone came out and voted, our nation’s representatives would change overnight. There is so much vested interest in keeping our country divided. It is for this reason that so many efforts are made to suppress the votes of black and brown people in this country.

While voting will not cure the racism that is deeply rooted in this nation, it will put better people into office who can enact policy to protect the most vulnerable, and stop the privileged from abusing their power. At the very least, they could end qualified immunity and have real consequences for murdering black people in the streets.

Saad Amer is an environmentalist, activist and the CoFounder of Plus1Vote, an organization dedicated to improving voter turnout and improving representation in our democracy. Reaching millions, the organization rallies voters on issues like climate change, social justice and voting rights.

He is an Expert Reviewer for the upcoming IPCC AR6 report, is on the United Nations Framework Convention on Climate Change’s Youth Constituency, and is an Advisor to the National Parks Conservation Association. He has researched the impacts of climate change on the ground in the Indian Himalayas with USAID, has taught environmental sustainability in China, co-created Harvard University’s inaugural Sustainability Plan, and discovered a new hybrid species in French Polynesia. He has written for National Geographic, PBS and the World Bank, and has spoken at the United Nations and TEDx.

He went to Harvard University where he studied Environmental Science and Public Policy with a minor in Organismic and Evolutionary Biology.

The Interview was conducted by Alexander Görlach. He is a Senior Fellow at the Carnegie Council for Ethics, International Relations in New York. In the past he held various positions at Harvard University in the USA and the University of Cambridge in England. Last year he was a Freedom Fellow of the Friedrich Naumann Foundation for Freedom. 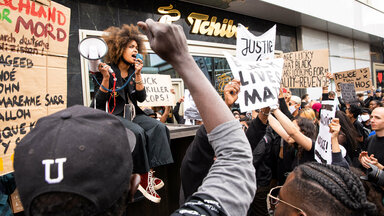