Pakistan and European Union under GSP+

Pakistan was awarded the GSP+ status on 1st of January 2014. It aimed to promote economic stability and good governance in the country. The status, which expires in December 2023, provides full removal of duties on most of the European Union’s tariff lines and is subject to compliance with 27 International Conventions. In the absence of this preferential status, Pakistan would have to bear an MFN tariff of 12% under most traded chapters (42 and 61 to 63).

For Pakistan to remain in the scheme for 10 more years, it must ratify and implement five new conventions in addition to the previous 27. Additionally, for a better approach, it should start negotiating with the EU on tariff lines not falling under the GSP+ preferential status for the next GSP+ agreement. 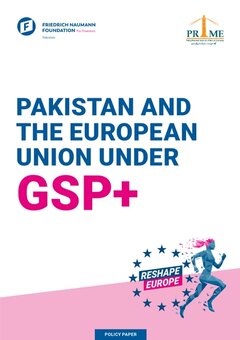 Pakistan and the European Union Under GSP+