A new era for the transatlantic alliance
Analysis
01.07.2022
5.8 Minutes
Germany

At a historic and transformative summit, NATO members on Wednesday 29 June approved new members, a new Strategic Concept and new initiatives to strengthen the Alliance. After tense negotiations, the membership applications of Finland and Sweden were finally accepted. This was not certain until the last minute because Turkish President Erdogan threatened to veto their membership request. Furthermore, leaders approved another comprehensive support package for Ukraine and "partners at risk" - in particular Moldova, Georgia and Bosnia and Herzegovina. Here is a brief assessment of the Alliance's new directions adopted at the NATO summit.

On Tuesday evening, Sweden, Finland and Turkey, which is now listed on all documents with the new name "Türkiye", announced in a trilateral memorandum that they had reached an agreement: Turkey strongly supports NATO's Open Door policy and the membership application of the two Nordic countries. Until the beginning of the summit, it was unclear how the negotiations between the three countries under the auspices of the NATO Secretary General would proceed. A possible Turkish veto clearly called into question the unity within NATO, which had thus far been strengthened by the Russian war of aggression against Ukraine.

As analysed by the FNF Turkey office, apart from concessions on national security interests and the prosecution and classification of terrorist organisations, it was also about negotiations with US President Biden. The former is clearly reflected in the memorandum, and on the latter there seems to be an agreement regarding American F-16 fighter jets. The sale of American defence equipment to Turkey has been paused since the procurement of the Russian S400 air defence system. Now both sides are signalling new exchanges in this regard. Formally, the agreement between Finland, Sweden and Turkey and the exchange between US President Biden and Turkish President Erdogan were regarded as parallel processes, but informally the Turkish-American relations have been influential for the voting behaviour on this decision.

The inclusion of Finland and Sweden in NATO has important security implications. Both countries are well positioned militarily and have already worked closely with the transatlantic alliance over the last thirty years. The accession of both countries would significantly increase the collective defence capability; at the same time, NATO's border with Russia, which is recognised as the "greatest threat to NATO" in the new Strategic Concept, would more than double. So far, Russian President Putin has been quiet about the announcement: unlike Ukraine, Sweden and Finland are free to join any alliance of their choice. However, Russia would not tolerate a military build-up on its borders.

Although the discussions on the Finnish and Swedish accession to NATO received most of the attention in the lead up to the summit, the original centrepiece was NATO’s new Strategic Concept. This is the Alliance’s main strategic document, which is normally updated every decade. With the last version dating back to 2010, and the transatlantic security landscape changing substantially in the meantime, it was high time for an update. After a lengthy process, the NATO heads of government adopted the Strategic Concept on Wednesday 29 June.

Russia as the Main Threat

The document places Russia front and centre NATO’s threat analysis. Whereas Russia in the 2010 Strategic Concept was still mentioned as a “strategic partner”, the new edition designates it as the “most significant and direct threat to NATO’s security”. This shift is largely caused by Russia’s war on Ukraine. However, the document also identifies the broader threat posed by Moscow’s efforts to modernise its nuclear weapon arsenal, its violation of arms control obligations and its attempts to destabilise countries on NATO’s eastern and southern flanks.

Another notable addition to NATO’s strategic environment is China. Mentioned for the first time, NATO recognises that China’s “stated ambitions and coercive policies challenge our interests, security and values”. Besides its military build-up, a key element in this are the Chinese efforts to control key technologies and industrial sectors. By using its economic leverage, Beijing seeks to create strategic dependencies and enhance its influence.

To address the threats in its new strategic landscape, NATO has several plans to adjust its defence posture. The most immediate measure is the plan to increase the number of NATO troops at high readiness to more than 300.000. Furthermore, there will be an enhanced focus on cyber defence, including closer cooperation with the private sector. In many areas, we can also expect closer cooperation with the EU, which NATO now considers a “unique and essential partner”.

In addition to the new defensive measures, the NATO leaders also endorsed a new support package for Ukraine. This strengthened Comprehensive Assistance Package includes support in areas like secure communications, anti-drone systems and fuel. There will also be longer-term support for Ukraine to manage the transition from Soviet-era military equipment to modern NATO equipment. Similar support packages were also announced for other partners at risk, such as Bosnia and Herzegovina, Georgia, and Moldova.

With new members, new strategic directions and new initiatives, the summit gave a strong signal of transatlantic unity and solidarity. By recognising the changing transatlantic security environment and indicating new ways to face the threats at hand, NATO has shown to be ready for the immediate future in these testing times. And by doing so, the Alliance has reaffirmed its relevance for many years to come.

Eine weitere Zeitenwende?
About the event 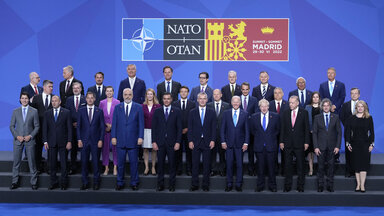