Bold, visionary and disruptive – this is how French President Emmanuel Macron is perceived in Germany. With his speech at the Sorbonne on 26 September 2017, not only did he reach out to his partner on the other side of the Rhine, but he also outlined a broad and ambitious roadmap for European policy-making.

By transcending the once prevailing two-party system of left and right, Macron and his political movement, La République en Marche (LREM), have truly transformed the French political landscape. However, it was unclear for a long time what the nature of this transformation was about that needed further explanation. The Friedrich Naumann Foundation for Freedom met this need with a first study of this new political landscape by situating LREM within the political spectrum of the already existing centrist political parties.

This upheaval continued at the European level, as LREM eventually joined the Alliance of Liberals and Democrats for Europe (ALDE), which rebranded itself as Renew Europe after the elections of the European Parliament in May 2019. There was no honeymoon period in this marriage, yet the new political group was able to grow together within two years of existence.

The presidential elections in April 2022 brought up the question of the continuity and sustainability of this transformation – on the one hand for France, but also for its partners in Europe. With the end of Macron’s five-year term, it seems just the right time to take stock of France's European policy-making under the French President. This is the very purpose of this second study, originally written in the French language in April before the first round of the Presidential election. The study is intended for a Franco-German and European audience and is now also available in English and German. 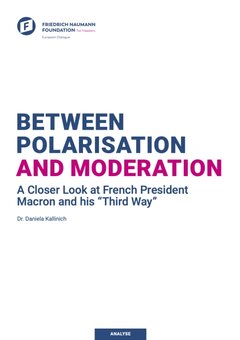 Between Polarisation and Modernisation

After almost three years, we have become accustomed to the dynamic President Emmanuel Macron in our neighbouring country France. With varying degrees of emotion, we have watched political impulses he has initiated, contentious reforms and resulting social reactions such as the protests of the Yellow Vests movement, observed with fascination his political boldness and perhaps also some clumsiness.

However, many are still faced today with the question of how Macron, his party La République en Marche and his policies are actually to be classified. The media in Germany often describe him as liberal and agree that he is a friend of Europe and a reformer. But how is his political profile, are his reforms really to be located?

In France, Macron is often also referred to as a centrist - a political characteristic that for many decades has rather stood for unsuccessfulness, fickleness and a lack of profile in terms of content. But what is it really about in terms of content? Who are the traditional representatives of this political tradition and is a president who governs with members of the left, the right and the centre really a centrist?