Nobel Peace Prize
"This is the Nobel Prize for journalism"

"This is for all of us - I'm in shock..." These were the words Maria Ressa used to tearfully comment on her nomination as the 2021 Nobel Peace Prize winner. The 58-year-old journalist was visibly overwhelmed after she had to mute herself several times for incoming calls during an online panel discussion. Coincidentally the event centered around the documentary "A Thousand Cuts" which highlights Ressa's courageous fight against the brutal crackdown on the media by the Philippine government. "It is a recognition which shows how hard it is to be a journalist, how hard it is to do what we do..." said Ressa just seconds after learning of her nomination. "It is also a recognition of how we will win the fight for truth, the fight for facts. We will hold the line!" With these final words, Ressa shifted her attention back to the discussion with her fellow panelists and the discussion and answered questions from the audience about freedom of speech and the media landscape, which is also under increasing pressure in Southeast Asia. Just one example of the professionalism which Maria Ressa and her work are known for. Continuing immediately to advocate for freedom of expression and information proofs her conviction and commitment.

A former CNN journalist, Maria Ressa co-founded Rappler in 2012 as an online news portal for investigative journalism in the Philippines. Rappler is one of the few media outlets to publicly criticize the policies of Philippine President Rodrigo Duterte. Amongst others Rappler investigated the use of fake social media profiles and the spread of disinformation by the government, uncovered corruption and documented Duterte's brutal crackdown on alleged drug traffickers. On the latter, a few weeks ago the International Criminal Court in DenHague launched official investigations on crimes against humanity: independent human rights organizations estimated the number of unlawful killings at up to 30,000.

At the global press freedom index the Philippines ranks 136th in an international comparison of 180 countries. As a result, both Ressa and Rappler have been accused several times on flimsy charges such as cyber lible. The charges based on the correction of a grammar mistake in an article written and published eight years ago. Prosecutors argued that the correction of a typo equaled the republication of the article which in turn violated a law that came into effect only four months after the initial publication of the article.

The nomination as Nobel Peace Prize laureate honors Maria Ressa's tireless and courageous fight for freedom of speech and press freedom, two fundamental prerequisites for democracy and peace. In this way Ressa, who receives the award along with Dmitry Muratov from Russia, stands representative for all journalists worldwide who face increasingly adverse circumstances. "This is the Nobel Peace Prize for journalists. It will help us because we still have a lot of work to do." commented the Filipino journalist further.

The Nobel Peace Prize for Maria Ressa is one of a series of events giving hope that popularly led Philippines is moving towards a better future: the official investigations which the International Criminal Court in DenHaag just started brings additional global attention on the Southeast Asian island state. Within the country signs are also pointing to upheaval: registration of candidates for the presidential election next year has just closed. Among those running for election is Leni Robredo, the liberal vice president who was elected separately from president Duterte and who is known for her pragmatic policies and effective handling of the covid pandemic. "We have huge problems to tackle." mentioned Maria Ressa on her appointment as Nobel Peace Prize winner - the hope is that the problems mentioned will change for the better in the upcoming months. 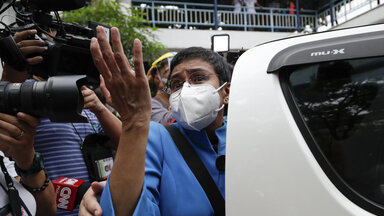 The Friedrich Naumann Foundation for Freedom congratulates Maria Ressa on her Nobel Peace Prize. The head of the Philippine online medium "Rappler" has been cooperating with the Foundation for a long time to improve media literacy and media freedom in the Philippines. For her tireless commitment, she has now been honoured with what is probably the highest political award.