The Corona crisis has kept the world on tenterhooks for a good year now. A highly contagious virus – initially downplayed in many places – developed into a global pandemic within a short period of time, plunging societies and their economies into deep crises and forcing them to impose far-reaching restrictions and cuts. The unexpectedly rapid production of effective vaccines has brought the containment and – hopefully – management of this pandemic within reach. However, the challenges for the state, the economy and society are and will remain enormous. It is already clear that the impact of this crisis goes deeper than the financial crisis of 2008/09. Governments have had to take on substantial additional debt to maintain structures – especially in the healthcare system – to provide bridging aid and to support companies financially. This paper, “The Impact of COVID-19 on the Serbian Economy in 2020,” by well-known economist Mihailo Gajić, examines and describes the impact in the central Western Balkans. Serbia’s economy has been severely affected by this crisis, although not to the same extent as, for example, neighbouring Croatia and Montenegro, which are more dependent on tourism. The Government’s measures are presented and evaluated clearly and precisely. Fears of a large wave of layoffs after the expiration of the Government’s protective measures are not unfounded. The question of how to promote the recovery of the economy, generate more growth and, at the same time, reduce the state deficit is addressed in the final section of the paper. The diverse proposals – as thought-provoking as they are far-reaching – will certainly trigger animated discussions, which can only be welcomed. They range from improving the health care system to strengthening judicial independence. Particularly noteworthy are the requirements for further digitisation measures in public administration, infrastructure, and especially in schools and educational institutions. 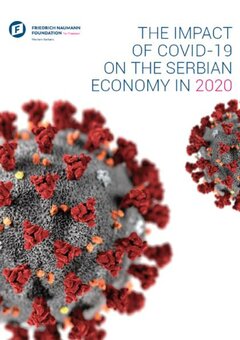 The Corona crisis has kept the world on tenterhooks for well over a year now. This poses great challenges for states and societies. This paper, "The Impact of COVID-19 on the Serbian Economy in 2020", by the well-known economist Mihailo Gajić, examines and describes the effects in Serbia and offers recommendations from a liberal perspective.