Russian Media in the Balkans

The influence of Russian state-run foreign media on public opinion in Western democracies is now common knowledge – regardless of its political qualification. Well-documented analyses are available, e.g. from the USA, France and Germany. The European Parliament has repeatedly called for member states to adopt strategies against „hostile propaganda“ from Moscow.
The situation in the Balkan peninsula is completely different. Russian media material is most welcome here. The political elite, such as in the largest and most important Balkan country, Serbia, or in the Serbian half of Bosnia and Herzegovina, traditionally maintain close ties with Russia. Since the political elite – above all President Aleksandar Vučić – almost completely control the media landscape, media offerings from Russia are very welcome. Because Serbian printed and electronic media suffers from chronic underfunding, the free information offered by Russia gains even more importance.
At first glance, dealing with the Russian-Serbian media partnership is of little relevance, because the Balkans are not uncommonly relegated as the „backyard of Europe“. However, if you look at South-Eastern Europe from the angle of power politics and security policy, the subject becomes enormously important. 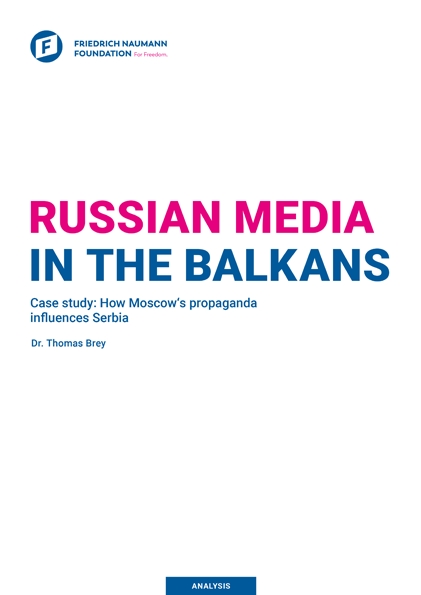