We journalists often forget why we write articles. Do we care about what readers are interested in? Have we given enough information or have we misled them? Thomas Brey, a journalist and editor with extensive experience in the Balkans, offers us specific advice in this handbook with an important message – that every journalist writes for the reader.

“There is no right or wrong in this area, no black or white, there is no absolute certainty. Only work experience and exchange with colleagues can lead to improved journalistic practice.”

German journalist Thomas Brey has worked as a correspondent and editor in the Balkans for decades, covering political and social events, but also the work of journalists in Serbia, Montenegro, Bosnia and Herzegovina, and Croatia. In this handbook for everyday work, Brey indicates clearly and concisely, with no mincing of words or superfluous explanations, with many examples, and with a healthy dose of humour, those craft difficulties which he has noticed in local practice, and how to deal with them.

Brey first reminds us of the theoretical foundations of journalism, of the role of journalists in society, and illustrates why there is no democracy without good media. He also describes the present context – explaining the decline in print circulation, market concentration and presenting not only who owns the media in the countries of the region, but also who their readers/viewers are. Brey uses relevant research to bring us closer to what citizens think about media freedom, journalists, information, and their place in political decision-making. He skilfully makes us confront the dilemma of all media – how our work is to be recompensed in the age of social networks and the slogan “content is free”? Readers and viewers are used to paying for content only with the attention they give to it, which is then consumed by advertisements, explains Brey; at the same time, the willingness of users to pay for good journalistic work is declining. As a result, he warns, editorial offices are shrinking, so the lack of people, the pressure of deadlines, and a multitude of topics make them less resistant to the influence of a growing group of public relations experts. The success of “bots” that impose topics and multiply opinions, and floods of fake news do not help us.

In all this, media professionals need to find their place and fight for the kind of journalism that democracy needs.

It is professional, politically and economically independent journalism, journalism that acts without fear, says Brey, which maintains a balance between distance and empathy, and which enables its readers to critique. The idea that social networks would allow everyone to be a reader and an editor at the same time was naive, he adds. Today, journalists are stuck between their role in a society that needs independent journalism and the media owners’ expectations of making a profit, and often of engaging in propaganda, because “politics sees the media as an instrument in confrontation with a political opponent”.

In order to guide us along the right path, Brey briefly takes us through the process of recognising what is and what is not news and what forms of journalistic expression (news, interview, comment...) are used by the German Press Agency (dpa), most of which are used regularly in our country as well. He reminds us of the golden rules of dealing with sources of information, teaches us how to report on crime cases, explains why we should always keep fact checking in mind, and gives us other short and unambiguous instructions for dealing with serious journalism.

Most of the handbook is, however, dedicated to practice. Through roughly 120 concrete examples (which can be seen in full by scanning the QR code), Brey shows us some of the most common mistakes made by the media today and makes us think about how the situation can be improved. He mainly uses recent reporting by credible media from the region as examples (instead of the obvious choice of tabloid reporting). Through constructive criticism, he shows us why it is wrong to exaggerate (quoting soldiers who allegedly claim that the floods of May 2014 were harder than the war [Novosti], comparing the reduction of pensions with genocide [Informer]); where there are hidden problems with the uncritical adoption of other people’s texts (propaganda is free); why headlines should not contain the journalist’s opinion; why it is important to build relationships with our own sources; and also what an inappropriate cover photo evokes in the reader.

If you are thinking about studying journalism, or are at the beginning of your studies; if you are new to an editorial office where colleagues and editors do not have time to work with you, and have the desire to become one of the best: start with this book. It can´t make up for experience, but it helps you skip a few steps, and points you in the right direction.

Not only a handbook for the inexperienced, this is also a handy prompt for experienced journalists, for media associations, and for those who teach journalism at universities. It will also be helpful to all those who want to improve their media literacy.

For me, this handbook was a reminder of the very important and somewhat forgotten standards of journalism, along with some useful solutions that I drew from the experiences of German colleagues. I must, however, admit that, while doing the practical exercises, I asked myself several times: “How can I apply all this every day?” Then I remembered that the difference between top professionals and “copyists” in journalism is the following: if you care you will find the time, at least until it becomes a habit.

So I advise those of you who are reading to pick up your highlighter pens, install a QR reader on your smartphone, and set off on your way to the heights of professional journalism. 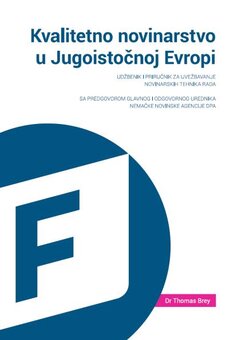