SPANISH PENSION SYSTEM
What can the pension system of the future look like?

Like Germany, Spain has one of the oldest populations in the world. Demographic change, combined with increasing life expectancy and very high structural unemployment (especially among young people), means that fewer and fewer younger people have to finance the pensions of more and more older people. At the same time, the public pension system is highly indebted. The Social Security reserve fund, known in Spain as the "piggy bank" of pensions, has hardly accumulated any funds; one-third of the country's public spending is already used to pay pension benefits (the largest budget item).

The social and economic crisis triggered by the Covid-19 pandemic will worsen the situation in the coming years. Logical consequence: without a real reform, pensions will shrink. Brussels has warned Madrid several times and made the reform of the pension system part of the Covid rescue package.

Therefore, the research cooperation of the Friedrich Naumann Foundation for Freedom with the Spanish think tanks Civismo and Instituto Juan de Marina could not have come at a better time. The study, entitled "Pension Reform Now," has developed a series of sustainable reform proposals to make the Spanish pension system fit for the future before it is too late. More flexibility and additional private pension provision are inevitable. A modern pension system must allow for a retirement adapted to modern working life. All people should be free to decide whether and how much they want to work in old age - according to their individual life planning.

Watch the animated video of the Italian artist Marco Tabilio, winner of the first International Comic Contest "Animate Europe" of the Friedrich Naumann Foundation for Freedom and get a first insight into the topic that concerns us all, young and old!

Here you can download the study (available in English and German): 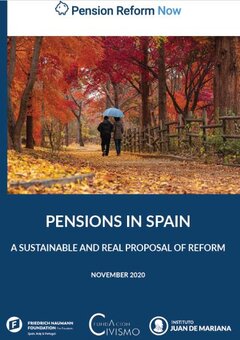 Like Germany, Spain has one of the oldest populations in the world. The public pension system is already heavily indebted and demographics and Covid-19 will make the situation only worse in coming years. Brussels has warned Madrid several times and has made pension system reforms part of the Covid rescue package deal. Hence, our research cooperation with Spanish think tanks Civismo and Instituto Juan de Marina could not be timelier. More flexibility and additional private retirement plans seem inevitable. The study under the slogan "Pension Reform Now" presents and in-depth analysis and makes policy proposals for a sustainable and future-proof reform.