Survey
The image of Europe in Greece today: commentary by Alexander Skouras

Reading the FNF survey findings, I was reminded of Friedrich Hayek’s warning from 1949, that to win the battle of ideas against illiberalism we should “make the philosophic foundations of a free society once more a living intellectual issue, and its implementation a task which challenges the ingenuity and imagination of our liveliest minds”.

Of course, much has changed since 1949. What remains the same though, is the intensity of the challenges liberal democracy is facing - both from despotic and totalitarian regimes from abroad, and from populists at home that target disillusioned citizens who feel that liberal democracies don’t deliver on their promises anymore, at least not for them.

As shown by the survey, Greeks have mixed feelings towards the EU. The things they value most about it is its liberal core: free movement of people, goods, services, and capital. They also feel that Greece belongs to Europe and do not think of leaving EU, the eurozone, or the west; they believe that Greece has benefited from its EU membership and that our country’s future is better inside than outside the EU. 7 out of 10 respondents favor the further deepening of the EU.

And at the same time, Greeks do not trust EU institutions; they rate poorly the European response to the recent crises, except for the pandemic; those who have a negative general opinion on the EU outnumber the positive replies by 50 to 48. What’s most concerning is that negative responses are heavier among young people who are experiencing worse living conditions and prospects than the previous generational cohort.

The takeaway seems to be that Greeks still believe in the EU, not for what it currently is but for what it stands for and could become. And the same seems to hold true for several EU countries.

Against this backdrop, Europe needs to turn the current crises into opportunities to reassert its place and mission in a changing world.

First, by defending liberal democracy against revisionist aggressors. EU’s stance against the Russian invasion in Ukraine still leaves a lot to be desired. Most of all, Europe should realize that politics without a strong commitment to liberal democracy and the values it stands for is no longer a pragmatic choice.

Second, by showing that liberal democracy still works. Europe needs to prove once again that openness, diversity of opinion, individual and civil liberty are strengths – not liabilities; it needs to speak to young men and women in Greece and elsewhere who feel that they do not have the opportunities they were promised. It is no wonder that even in today’s Greece the liberal tenets of the EU, the four freedoms, are considered its most valuable feature.

European liberals should spearhead this movement. We have both the analytical tools and the policy proposals that can give Europe the impetus it needs to become a bastion of freedom, prosperity, and opportunity once again.

We do have the liveliest minds around. What remains to be seen, is whether we can mobilize them for the cause of our free society. That’s the challenge ahead.

The analysis was written by Alexander Skouras, President at the Center for Liberal Studies (KEFiM), for the publication of the survey "The image of Europe in Greece today".

The image of Europe in Greece today: commentary by Alexander Skouras 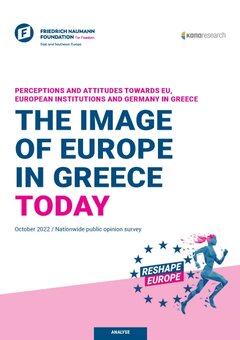 The image of Europe in Greece today

How do Greeks perceive the EU today? Do they feel European? Do they see their country´s future in the EU and in the common currency? Do people trust the EU institutions, especially when it comes to crisis management? Or do we see, as in other member states, a growing Eurosceptism? How do the Greeks feel towards deeper integration of the Union or about EU enlargement? How does Russia’s aggressive war against Ukraine affect perception of the EU in Greece, and how do people feel about Russia after February 24th? The Friedrich Naumann Foundation for Freedom investigated these and many other questions in this study. The survey was conducted in September 2022.