China
Chinas influence in Germany: Academia and Media are the Achilles Heel

Is Germany a target of Chinese influencing operations? The Taiwan-based Thinktank Doublethink Lab finds: It is, and quite significantly so. The Lab has recently launched its China Index initiative, a cross-regional project that is intended to map the influence of the People’s Republic of China (PRC) in different countries around the world – Germany among them.

The China Index looks at nine fields in which China aims to influence countries: media, foreign policy, academia, domestic politics, economy, technology, society, military, and law enforcement. Each field contains 11 key indicators, which enables the creation of comparable data. For each indicator, a score between 0 (not affected) to 4 (highly affected) is awarded, coming to a maximum of 44 points per field. The Chinese Influence is then evaluated along the dimension of exposure, pressure and effect. Instead of providing an absolute means of determining the PRC’s influence, the index aims to establish relative criteria that can help to compare PRC’s influence internationally.

How Germany is affected

In the case of Germany, PRC’s impact is average, but the measures of Germany’s exposure to China and the stress incurred are relatively high compared to measures of impact on other European countries. The most vulnerable domains in the German case are academia and media.

In the field of academia, Germany scored 36 out of 44; which is 2nd most influenced among the 36 surveyed countries. The proverbial Achilles heel are institutional partnerships, financial and personnel support, and offers from talent recruitment programs from the PRC, according to the data. The China Index also found instances of self-censorship among German institutes and forms of pushback from the PRC side against research organizations and scholars whose work does not align with Beijing’s efforts. The latter was, for example, the case for the Mercator Institute for China Studies (MERICS), upon which Beijing has imposed sanctions in retaliation for their outspoken analysis.

In addition, it is common for German universities or research institutes to establish partnerships with PRC-connected entities; this should, ideally, be an example of globalized academic exchange. However, a lack of restrictions on scientific collaboration between Germany and the PRC leads to indirect financing or assisting in questionable research: Dr. Tang Kun, a Chinese specialist in human genetic diversity, conducted research using DNA samples taken in 2018 from 612 Uyghurs in Xinjiang, where massive detention camps and surveillance against the Muslim minority are present. The German research institution Max Planck Society was one of Tang’s funders during his collaboration with the Chinese police although the institution claimed that he failed to report the matter as required.

A recent joint investigation also discovered that several leading German research institutions such as at the University of Bonn, the University of Stuttgart and some Fraunhofer Institutes have collaborated closely with Chinese colleagues affiliated with the National University of Defense Technology of the People’s Liberation Army (PLA) in fields like artificial intelligence, nuclear weapons, and quantum research.

The second field where Germany is strongly affected by PRC influence is Media. In this field, the index evaluates how PRC entities influence public debate and media coverage about the PRC in the surveyed country.

Here, Germany scored 28 out of 44, and was ranked in 4th most influenced, together with Australia. Several Chinese diaspora media outlets produced content in German – with varying levels of influence or support from the party-state. Prestigious German broadsheets such as Handelsblatt or FAZ also have records of publishing paid content provided by Chinese state media and attending paid media tours in China. Noteworthy is the case of Patrick Köllmer, a German social media influencer who took part in the Xinjiang tour held under the auspices of the Cyberspace Administration of China (CAC). He went on to create content that amplified pro-Beijing propaganda and Chinese narratives to counter criticism about human rights abuses in the region. An example of this would be his video “‘Xinjiang in the

eyes of a German boy’” which is a condensed version of an interview he gave, where he criticized foreign media for criticizing China, and asserting that all was well in Xinjiang. These attempts are intended to promote a positive image of the PRC.

The necessity of addressing political undertones when interacting with China

Exploiting the one-sided openness of a country is the central PRC strategy used to exert its influence over Germany and other liberal democracies.

In the case of the recent German research institutions' collaboration with PLA-affiliated scientists, two risks should be taken into account: one, the potential dual-use application of these studies, and two, the risk of illegal transfer that means knowledge acquired from Germany could contribute directly to the PLA. This is cause for concern, especially when the PRC’s political system co-opts their research for use with the military plans of the Chinese Communist Party. As for the media, rising levels of interaction with the PRC at the level of content providers helps Beijing exert influence over political debates and public perception of Germans in relation to PRC even without direct intervention. Since Germany did not join the Belt and Road Initiative (BRI), there is less formal institutional access supplied by the BRI network. This is, however, an alarming phenomenon that is becoming more prevalent in south-eastern Europe.

A new approach for handling China is needed

German stakeholders’ perceptions of the PRC have shifted toward greater caution in recent years, with Berlin sharing the assessments and multi-faceted approach of Brussels towards China, who defined the country as a partner, competitor, and systemic rival. However, incidents such as the PRC’s economic coercion against Lithuania and its support of Kremlin in the Ukraine War revealed Beijing’s reduced willingness to follow rule-based international order and an ambition to promote an authoritarian governance model.

It is therefore time for policymakers to handle the PRC primarily as a rival, implementing transparency requirements regarding collaboration with PRC-related actors while asserting the openness of German society. For instance, while it is important not to violate freedoms inherent in research, in a strongly affected domain like German academia, background checks for Chinese academics and/or stricter risk-management regulations for co-research in sensitive fields are practical policy recommendations. Finally, each domain analyzed by the China Index is linked to detailed questions that warrant more in-depth research; the overall Index score nevertheless provides a broader understanding that can potentially raise awareness for global stakeholders. In Germany, what remains to be seen is a new China strategy, which is expected in late 2022. Given the significant PRC influence in the country, developing a more security-minded and rigorous approach toward handling the PRC in different fields is a priority.

Here you can find the complete China Index.

Prof. Dr. Puma Shen is an assistant professor at the National Taipei University’s Graduate School of Criminology, Chairperson of Doublethink Lab, and vice president of the Taiwan Association for Human Rights (TAHR).He was a lawyer, and an expert in white-collar crime, including state crime, disinformation campaigns and financial crime. He published several papers regarding China information operations in Taiwan and the US, and is now also investigating United Front Work activities in Taiwan and Southeast Asia.

Yu-Fen Lai cooperated with Doublethink Lab on the China Index, Germany, as a local expert. Her research focuses on Taiwan, Hong Kong, cross-strait relations, disinformation from China, and Chinese diaspora media. Yu-Fen Lai holds a MA degree from the Free University of Berlin and a BA degree from National Tsing Hua University, both in Sociology. 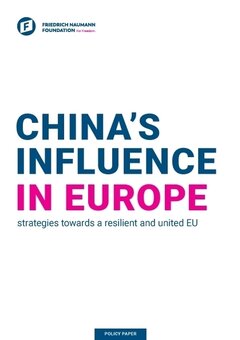 This policy paper takes a look at the means that China uses to weaken the ability of individual states and thus the EU as a whole to act. At the same time, it evaluates various strategies used in dealing with economic or political coercion exerted by China. It is aimed at readers who follow China's multifaceted engagement from the perspective of academia. The selection of countries looks beyond Europe: the USA, Australia and Taiwan all have their own stories to tell with regard to influence from China. Policy recommendations provide suggestions on how the EU can behave in its greatest crisis.