#FFI
The world as it should be

Azareena Abdul Aziz, or Eena, likes to travel, because it gives her a fresh view on the world. She sees it as an opportunity to interact with people of different backgrounds, allowing her to form a wider understanding not just of cultures, but life itself. It is the same spirit of adventure – to see the world as it should be – that she brings to her work.

Eena is the Program Manager for Outreach and Empowerment of Sisters in Islam (SIS). Describing herself as an ordinary person, she is too humble to admit that she’s done extraordinary things.

Working in an organization that defends the rights of Muslim women, Eena tries to break with stereotypes. She fully grasps that the task requires changing mindsets and introducing a cultural shift, but she is prepared for the long road that it takes to bestow a more open society for future generations.

There is nothing Islamic about child marriage

Women on the frontlines, not the sidelines

As a Muslim girl growing up in Johor, a state in southern Malaysia, Eena talks about how it was compulsory to attend religious school in all schools apart from the national secular school. She shares that she questioned the rigidity of Islam when it comes to pahala, or the rewards a Muslim can earn if s/he does religious service. She also struggled to accept the treatment of women: “I always wondered why women were seen as the cause of sins, and held accountable for all the sins,” muses Eena.

To be labeled a good Muslim woman, one must wear hijab, be obedient to her husband and stay in the background. The only recognized experts to speak about Islam are ulama or men. SIS, who challenge the mainstream interpretation of Islam’s sacred text are often pushed aside.

SIS is an NGO committed to promoting the rights of women within the frameworks of Islam and the universal principle of human rights. They tackle issues such as child marriage – a practice that is covered by Malaysia's Islamic Family and Sharia laws and other rules that are biased towards men.

“There is nothing Islamic about child marriage” asserts Eena. She emphasizes that Islam’s holy book Quranstates that marriage is between two consenting adults. “It has always upheld the interest of the child. It is the interpretation written in the antiquated law that is making children suffer” she points out. SIS calls for the strict legal ban on child marriage in Malaysia.

Malaysia has grown rapidly in terms of economic development, but progress has been limited in that area. For Eena, Islamic discourse, particularly on women’s rights, remains a twisted topic that often aims to uphold traditions rather than looking into the future. Religion and race are used as political tools, indoctrinating societies to keep their conservative ways that result in the marginalization of women. “In this modern world, this is not acceptable”, she contends.

Eena goes on to say that the women of today are very educated and that they should be given the opportunity to lead their own lives. They are just as deserving of leadership positions as men, because they often bring different perspectives to issues have an innate empathy.

After Malaysia’s celebrated general election in May 2018, that ended Barisan Nasional’s 61-year rule, SIS pushed the new government to implement a minimum of 30% female representation in the cabinet. A quota becomes imperative in a society that overlooks women. It is a crucial step towards gender equality. However, the government has yet to realize its promise.

But Eena’s journey will not be bogged down by failed promises and delays. Her personal commitment to shatter patriarchal views and break gender stereotypes fuels her to sail on. Promoting gender-sensitive school curricula, engaging all community sectors in discussions on gender equality and initiating dialogues on women’s rights with men set her course to, possibly, a lifetime yet meaningful voyage. And then maybe, more people would also see the world not as it is, but as it should be. 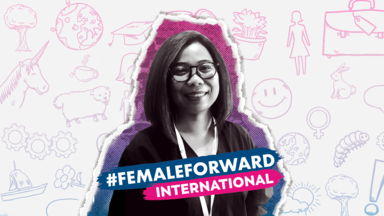 In Malaysia, a country with a predominantly Muslim population, discrimination towards women is rooted in archaic laws. Azareena Abdul Aziz of the Sisters in Islam unwaveringly fights towards a fair and equal treatment of women.