Innovation for Democracy
Meet Our Panelists

Wen-Ling Tu is Dean of the International College of Innovation and Professor of the Department of Public Administration at National Chengchi University, Taiwan (NCCU). Her research focuses on science and environmental governance, risk communication, and public participation. She is the coordinator of a popular science TV program “Open the S-File: When Science meets Social Controversies” which won the Golden Bell Award in 2019. She is also an active organizer of citizen deliberative forums on various kinds of policy issues in Taiwan. She has been involved in environmental movement in Taiwan since 1990s and is a founding member for several environmental organizations. With the goal of deepening Taiwan democracy, she has founded the Centre for Innovative Democracy to research and practice new methods of public deliberation and policy communication. She currently serves as the board director of the Environmental Right Foundation (ERF) and the national Central News Agency (CNA).

Dr. Christopher Gohl is a researcher and teacher at the Weltethos Institute at the University of Tübingen. He received his Ph.D. degree in Political Theory from the University of Potsdam for his prize-winning dissertation on the organization of participatory political processes. Gohl brings extensive experience in business and politics to his work. As a trained mediator, he was project leader of the Regional Dialogue Forum Airport Frankfurt from 2005-2008, Germany’s largest political mediation. Between 2010 and 2012, he served as head of the Unit of Political Planning, Program and Analysis in the headquarters of the governing Free Democratic Party. In 2016 and 2017, he was a contributor to the draft of the Oxford Manifesto 2017 of the Liberal International. He served for the remainder of the term as member of the German Bundestag in 2021, and is the Ombudsperson of the Free Democratic Party.

Dr. Meichun Lee is an anthropologist with research interests in civic tech, digital activism, data politics, and mis/disinformation in Taiwan and East Asian. She holds a PhD from the University of California-Davis and an MPhil from the University of Cambridge. Currently, she is the postdoc researcher of the Research Institute for the Humanities and Social Sciences (RIHSS) at the Ministry of Science and Technology, Taiwan. Her dissertation investigates how civic tech activists in Taiwan translate openness from digital technologies to politics, and create an ambivalent space that makes activism possible regardless of the changing political landscape. Dr. Lee’s works have been published in PoLAR: Political and Legal Anthropology Review and Anthropology Now. She also writes for GUAVA Anthropology and The Reporter. Dr. Lee is also the co-author of Taiwan Open Government Report 2014-2016.

Dan Barna is a Romanian politician, member of Parliament and the Vice-president of the political party Union Save Romania.

In Parliament, he is a member of the Committee for Foreign Policy.
He is the former Deputy Prime Minister of Romania.

Adriana Groh is currently leading a project on digital sovereignty, participation and data commons at the newly founded The New Institute in Hamburg. Previously, she was the director of the Prototype Fund, an innovation fund of the Open Knowledge Foundation and the German Federal Ministry of Education and Research, and co-initiated several tech projects, such as a chat app for the 2017 and 2021 federal elections and the #WirVsVirus Hackathon 2020. She studied Public Policy and Democratic Innovations in Frankfurt and Masstricht.

Emil Schnackenberg is currently a member of the Management Team for the Development Management Department in the City of Cape Town. Previously he was the Programme Manager for Transportation Research at the CSIR Transportek South Africa delivering planning and technology solutions to mainly Government Departments, including decision support systems and knowledge platforms. He studied Town and Regional Planning at the University of Pretoria.

Shu Yang Lin is a design consultant of PDIS.tw, an innovation lab in the central government of Taiwan that works on open government, social innovation and youth council. It provides channels for civic engagements, sets up cross-ministerial policy making process, works on digital regulatory reforms with grass-root civic tech communities, and supports the operation of social innovation lab.

Eran is a faculty member of the Department of Industrial Engineering at Tel-Aviv University. He is also the co-director of the IWiT (Interacting with Technology Lab) and the head of the undergraduate program. The lab is working on usable privacy and security, large-scale analysis of interactive behavior, and human-AI interaction. Our lab is funded by agencies such as the Israeli Science Foundation (ISF), DARPA, European Union Horizon 2020 Program, and Israel Ministry of Science. Recently, Eran was a visiting Associate Professor at Cornell Tech University.

Irakli Khorbaladze is a founder and Executive Director of the Good Governance Institute. More than a decade Irakli has been involved in politics, specializing in the fields of institutional development of political parties, policymaking, and election management. Irakli Khorbaladze was a Member of the Central Election Commission of Georgia between 2012 – 2016, and he is a manager of the e-Voting Pilot Project for the Municipal Elections 2021. In the past, he was a member of the Republican Party of Georgia, serving as a Member of the National Committee, Secretary of the Organizational Development, and Parliamentary Secretary. He is regularly consulting international organizations on various matters related to good governance and elections.  Irakli is a fellow of the John Smith Thrust (London) and a member of the Central Eurasian Leadership Alliance.

Chihhao is the co-director of IORG, a Taiwanese research organization that uses data science to strengthen public information literacy and counter information manipulation. Chihhao is a software engineer and a designer. While working at IORG, he is also an active contributor to g0v.tw, Taiwan’s civic hacking community, and a co-organizer of the Facing the Ocean civic hacker network in the West Pacific.

Valeriu Pașa, 35 years old, Chairman of the "WatchDog.MD" Community. Civic activist, researcher in politics and media propaganda, studies electoral processes and related public policies. He has worked as a manager in the cultural field, researcher at the Moldovan Academy of Sciences, consultant in public communication and electoral management. He is currently managing an extensive program to combat disinformation and political propaganda of the Kremlin and kleptocratic groups in the Republic of Moldova. Within this program, two extensive campaigns have been conducted to support the integrity of the 2020 and 2021 electoral processes. As a result,  the impact of disinformation and external interference on the results of the presidential and parliamentary elections has been significantly weakened.

Prof. Emre Erdoğan is the Head of the Department of International Relations at Istanbul Bilgi University. With a doctoral degree in Political Science from Boğaziçi University, he has served as researcher and senior consultant in various projects in academia and civil society. His research focuses on political participation, foreign policy and public opinion, child and youth well-being, methodology and statistics. He extensively studies and publishes about youth in Turkey, integration of Syrian refugee youth in Turkey, othering, polarization, information disorders and populism. He’s also acting the scientific coordinator of TurkuazLab, an initiative to develop strategies to mitigate polarization. Moreover, he is one of the coordinators of several projects targeting to empower individuals about information disorders and infodemics.

Phumzile Van Damme is an Anti-Misinformation and Digital Rights Specialist, a member of the Real Facebook Oversight Board and the International Grand Committee on Disinformation, an international array of legislators, policy advisors, and other experts working together to forge global alliances to battle against online disinformation.

A former Member of Parliament in South Africa, Van Damme served on the Communications and Digital Technologies committee as Shadow Minister, where she played a pivotal role in holding social media platforms accountable and fighting against misinformation. Van Damme is also the founder and Coordinator of South Africa’s first elections-dedicated anti-misinformation monitoring and combatting initiative. She currently works as a Consultant.

How can Innovation foster Democracy? 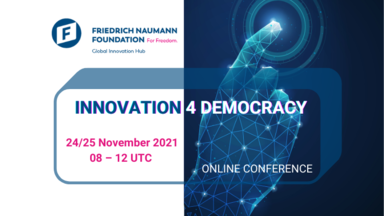 What strengthens democracy? What are new approaches, new challenges? Join our conference to hear experts discuss and share their best practices, and ask your questions! In the conference on 24/25 November, we want to examine more closely four topics that can give us some hints about how to go about our goal.