Domestic Control, Global Influence - and what Europe should do
News
17.12.2021
2.9 Minutes
Taiwan

China’s new digital currency is being implemented in many parts of China, and will soon achieve nationwide distribution and usage for small transactions – to begin with. This new currency will give the People’s Bank of China and, by extension, the Chinese Communist Party, almost unlimited insight into the financial lives of its citizens and companies for purposes benign or malign, depending on one’s viewpoint. While physical cash will still be used for black market and rural area transactions, the e-RMB will dominate.

Its legal and technological infrastructure will propel its distribution and use, so that it becomes the currency used by everyone, all the time, everywhere in China. Real-time transaction visibility, combined with the use of advanced analytical tools, AI and a penchant for economic planning, will bring huge benefits to police, regulators, the surveillance state and economic policy planners alike. The benefits to regular citizens beyond the current cheap and fast payment options are limited, although some benefits are expected to be developed by innovative private-sector players who can make use of the e-RMB’s programmable nature.

The Cross-border Interbank Payment System CIPS is quickly spreading along with China’s economic growth and trading prowess, with many countries and major global financial institutions using it. Combined with the e-RMB’s visibility and control features, it could be the trusted channel for the PBOC to allow the RMB to circulate more freely beyond China’s borders. The RMB could become far more commonly used as an international currency, displacing the use of the Euro and USD. Its aim is to be an alternative to the Western-dominated SWIFT – and SWIFT has established a joint venture with the PBOC to advance that aim.

What can the USA and Europe do?

It is unlikely that the USA has the focus or intention to slow the adoption of the CIPS + e-RMB combination before it becomes widespread enough to provide a global alternative that could seriously blunt the US weaponisation of the current Western-dominated international transfer payments system (i.e. to enforce its sanctions).

Europe may be able to play a role in setting rules for CIPS before it becomes entrenched if it invests now in significant research, policy and diplomatic efforts to negotiate with China over the spread of the CIPS and the e-RMB. It should avoid over-regulating private-sector options for money transfer (including cryptocurrencies) so they can provide an alternative to the new Chinese system.

It is undeniable that the PBOC has, for almost eight years, led the world in developing and testing a CBDC that serves a wide range of domestic priorities, especially those that allow it to consolidate control over Chinese citizens and companies. Combined with the CIPS system, it will finally unleash the potential of the RMB to allow China to begin to realise the benefits of hosting a truly international currency. Its intent is clear, its focus strong and its progress sure. The rest of the world needs a strong and clearly thought-out response to this dramatic shift in world economic and monetary structure before it becomes a shift in power. 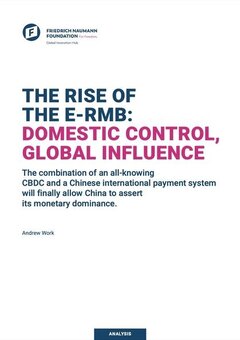 The Rise of the e-RMB: Domestic Control, Global Influence

China’s new digital currency is being implemented in many parts of China, and will soon achieve nationwide distribution. This publication will introduce the latest developments regarding the implememtation of e-RMB, analyze its possible impact to the world, and provide policy recommendations.