Afghanistan
No stability and peace without protecting women and girls

The plight of Afghan women under the Taliban was used in many countries to convince voters to support the US-led military intervention in Afghanistan after the 9/11 attacks on the US. “Only the terrorists and the Taliban forbid education to women,” then-US first lady Laura Bush famously told Americans. Similar messages in other troop-contributing nations, including Germany, helped encourage support for the war.

On the 20th anniversary of the 9/11 attacks, the Taliban were newly back in power in the Afghan capital, Kabul. The last foreign troops had left at the end of August, and a reckoning about what happened and why was just getting underway. How had the US and its allies spent so many lives – mostly Afghan but also foreign, military and civilian – and so much money, only to arrive at this outcome? What did it say about future geopolitics, the role of the US, and the future of Afghanistan?

The new Taliban authorities, meanwhile, were busy – being the Taliban. They were assaulting journalists. They were hunting down those who had worked against them. They were banning music.

Their old approach to the rights of women and girls was largely unchanged. They fired women journalists from state media. They first warned women to stay home from work for their own safety because Taliban fighters who had “not yet been trained” might mistreat them. Then they just fired women from most government jobs. They issued tough – and, for many universities, impossible – new guidelines on how women could attend a university, requiring strict gender segregation. Then, on September 18, they let boys go back to secondary school, but not girls.

That was only the beginning. They banned women’s sports, dismantled the system to protect women from violence, abolished the Ministry of Women’s Affairs and replaced it with a revived – and draconian – Ministry of Vice and Virtue, and made it harder for women to access health care.

Women interviewed by Human Rights Watch describe living in a nightmare, as everything changed overnight, with a devastating impact on all aspects of their lives including their mental health. They are largely trapped inside their homes due to fear of the Taliban and Taliban restrictions on women’s movement, and are watching work, studies, and dreams they had devoted their lives to vanish, perhaps forever. A university student who had left her home only twice since the Taliban takeover said, “It‘s not ordinary – you have no studies, no lessons, nothing. Just looking at the walls. This is like a prison.”

So where is the reckoning on women’s rights? Women’s rights activists have made important progress around the world in the 20 years since the Taliban were previously in power, from 1996 to 2001. These advances make the Taliban’s violations of the rights of women and girls even more cruel and intolerable than they were in 2001.

In recent years, several countries – including Sweden, Canada, Mexico, and France – proclaimed that they have a “feminist foreign policy.” According to the Swedish government, a feminist foreign policy “means applying a systematic gender equality perspective throughout the whole foreign policy agenda.” Feminist foreign policy is also a recognition that you cannot have human security when half the population is oppressed and living in fear. As Heiko Maas, Germany’s foreign minister wrote in 2020, “Numerous studies demonstrate that societies in which women and men are on equal footing are more secure, stable, peaceful, and prosperous.”

How should a world increasingly embracing “feminist foreign policy” respond to Taliban violations of the rights of women and girls in 2021?

Concerned governments face a difficult challenge in Afghanistan. They should stand up for the rights of women and girls and use what coordinated leverage they can to push for protection of these rights. Every country should make it clear to the Taliban that violating the rights of women and girls undermines Taliban efforts for international recognition and developing normal relations with the rest of the world, including links to the global financial system and development assistance.

At the same time, donor countries should avoid taking action that would worsen Afghanistan’s deepening humanitarian crisis and disproportionately affect women and girls – and work urgently to reverse this situation. Afghanistan is facing a major economic collapse. Prices for food and other essentials have risen, even as most banks remain closed, and the United Nations has reported limited access to cash and possible food shortages.

Before the Taliban takeover, more than 30 percent of the country was facing acute food insecurity; now over 40 percent is. Last December, the UN Children’s Fund, UNICEF, said that of the almost seven million children under age 5 in Afghanistan, an estimated 3.1 million, were acutely malnourished and that, “This implies a staggering 1 in 2 children under five are in need of acute malnutrition treatment services to save their lives.”

The United Nations Development Program says that by mid- 2022, 97 percent of Afghans could be living below the poverty line.

Balancing these priorities – stemming the humanitarian crisis while standing up for rights – requires careful and coordinated actions. The renewal of the mandate of the United Nations Assistance Mission in Afghanistan (UNAMA) in September was an important step. It provides a mechanism for monitoring human rights from within the country and engaging in regular discussions with the Taliban on meeting Afghanistan’s obligations under international human rights law. These obligations include the duty to ensure full gender equality, as provided under the Convention on the Elimination of All Forms of Discrimination against Women, which Afghanistan ratified in 2003. Germany and other countries will have an important role in ensuring that UNAMA has the resources, staffing, and diplomatic backing necessary to perform these functions.

As a nation that sent troops to Afghanistan, Germany should use its influence to push its partners, including the US, to see themselves as having a long-term responsibility to protect the Afghan women and girls whose plight was used to help justify the war. As an important donor to Afghanistan, Germany should sustain its aid assistance to Afghans and urge other donors to do the same. It should take on and help lead the tricky task of finding ways to assist people in desperate need and fund essential services like health care, psychosocial – mental health – support and education without lending as- sets and legitimacy to the Taliban.

Germany also has an important role to play assisting the many Afghans, especially women, who have fled or will flee Afghanistan because they fear persecution or threats to their lives under a Taliban government. The German government should continue urgent efforts to evacuate people identified as ‘in need of special protection’ and should reopen and expand its list of evacuees to include women’s rights and other rights defenders, high-profile women, nongovernmental organization workers, and journalists. The process to add someone to the list should be streamlined and non-bureaucratic.

Germany should speed up the asylum process by granting humanitarian visas to women and offering them and their families safe and quick passage by air to Germany or, when that is not possible, by negotiating for them to be able to pass through land borders into neighboring countries. The government should ensure that Afghans arriving in Germany are granted temporary residency permits and afforded the right to work, and access to health care, psychosocial support, education, and job opportunities.

Germany should also work with the European Union and other countries to ensure that refugees in countries neighboring Afghanistan and across Europe are being treated according to international human rights standards, including living in sanitary conditions and having access to health care and education. Germany could provide aid assistance to countries that need help fulfilling these obligations. 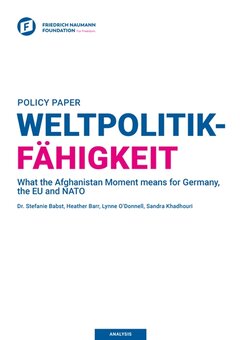 Is the withdrawal of the West from Afghanistan a current political event that soon fades from the public (and political) awareness? In response to the devastating events of 9/11, a war on terrorism was launched that is unparalleled. Today, Afghanistan has fallen back into the hands of those the country was "saved" from twenty years ago. A regime under which women and girls in particular are suffering. How should a world increasingly committed to a feminist foreign policy respond to the Taliban's violations of women’s rights? How to include other actors in crisis management and containment, how to confront the failure of the West in Afghanistan and the drastic loss of credibility that comes with it? On the twentieth anniversary of the start of the war in Afghanistan, Germany's, the EU's and NATO's Weltpolitikfähigkeit is put to the test.